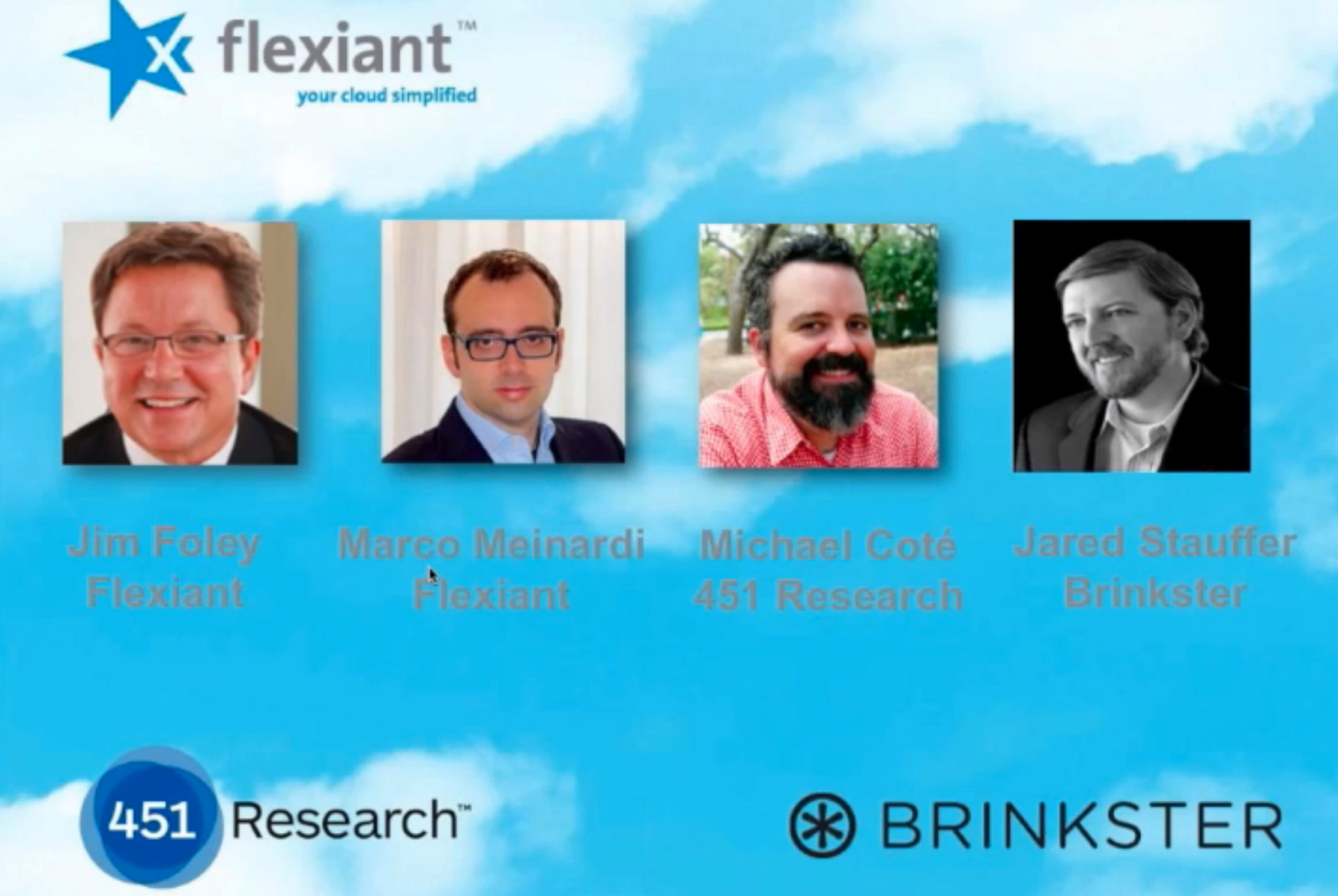 A few days ago I have participated as a panelist in the webinar titled “Cloud Can’t Wait” alongside Michael Coté (@cote), analyst at 451 Research, Jared Stauffer (@jaredstauffer), CEO at Brinkster and Jim Foley, SVP Market Development at Flexiant.

We have debated the cloud opportunity. Sounds old? Maybe. However, surprisingly enough, the majority of IT infrastructure buyers haven’t adopted it yet. Skepticism, natural resistance to change, staff self-preservations and other excuses are amongst the primary reasons for that. If you think about it, this is actually pretty normal when a technology is so much disrupting the status quo.

The title of the webinar “Cloud Can’t Wait” may sound like a way to build the hype but, with regard to cloud, I think we all concur that, by now, the hype is way over. As I’m sure we agree that, indeed, the cloud can’t wait. Those who’ve fully embraced it have demonstrated to have significant advantages over those who haven’t, and these advantages are directly affecting their competitiveness and even their ability to stay in business.

The opportunity is for everyone

We talked about the cloud focusing on the infrastructure side of it. We have deliberately excluded SaaS consumption from the statistics and the debate, as that has a totally different adoption curve and, when put in the same basked, can easily mislead the conclusions. So rule number one, treat SaaS numbers separately.

Seeing ISaaS as third category was pretty interesting to me as we all knew it existed but we never managed to label it correctly. And as Michael stated later on, expertise in this specific category is what some service providers, mostly those coming from the managed services space, can actually offer as value add on top of raw infrastructure, in order to win business in this space.

So what is this cloud opportunity we are referring to? Again, Michael explained it this way:

“[With a 29% year over year growth rate] there is the opportunity to get involved early and [as a vendor] participating in gathering lots of that cash. Instead, cloud buyers such as developers or enterprises, are not interested in participating in this growth, but in the innovation that comes out of this cloud space, they want to use this innovation and efficiency to really differentiate themselves in their own business”

So the opportunity is there and it is a win-win for everyone.

Why people are buying cloud and who are they?

If you ask yourself why people are buying cloud and what they’re using it for, you maybe won’t find the answers easily. That’s where the work of 451 Research becomes really helpful. As Michael told us, from the conversations they have everyday, it came out that most organisations use the cloud because of “the agility that it brings, the speed you can deploy IT and [afterwards] that you can use IT as a differentiator. [Because cloud] speeds time to market”.

To that, I would add that cloud also speeds the ability to deliver changes which translates into adaptability, essential for any chance of success in our rapidly transforming economy.

Michael continued on this topic:

“Over the past roughly 5 to 10 years much of the focus of IT has been on cost savings, keeping the lights on as cheaply as possible, but things are changing and qualitatively we see this in conversations we have all the time, companies are more interested in using IT to actually do something rather than just saving money, and cloud is perfectly shaped for offering that”

Great. This seems to be now well understood. The days of explaining to organisation that there is more to the cloud than the simple shift from CAPEX to OPEX, are gone.

Who are buying cloud infrastructure services today? My first answer went to:

“Developers. This word returns a lot whenever we talk about cloud. They’ve been the reason of the success of AWS, for sure. That’s because they just ‘get it’, they understand the advantages of the cloud around how they can transform infrastructure into code. For them, spinning a server is just like writing any other line of code for doing anything else. They managed to take advantage of the cloud from the very early days and they contributed to make cloud what it is today under many aspects”

With regard to enterprises, I also added:

“enterprises are [currently] investing in private clouds because that’s the most natural evolution of their traditional IT departments, but eventually, as they get to provide cloud, it’s gonna be extremely easy to get them to consume cloud [services] from third parties. That’s because cloud is more of a mindset than just a technology”

How can you profit from the cloud opportunity?

So you’re a service provider and you want to participate in the cloud opportunity. How do you do that? Michael suggests to use the “best execution venue” approach. That starts, as Michael explains, with understanding the type of workload or applications that you want to address. Then ask yourself what skills, capabilities and what assets do you have that you can leverage to address a specific type of workload? This will tell you what value you can bring on top of raw infrastructure in order to compete and take advantage of this fast-growing multi-billion market.

“Eventually service providers should not consider themselves just part of one of these [IaaS, PaaS or ISaaS, Ed.] segments. Eventually I think the segmentation of this type will not there anymore, and there will be another segmentation based more on use cases, where the service provider will specialise on something and will pick a few services to make the perfect portfolio to match a specific use case in a target market”

Yes I’m a big fan of the use case approach. As I’m a big fan of trying to understand what the cloud is exactly being used for. Even if the press tries to push the cloud as heavily commoditised service, you should never stop asking yourself what your customers are doing with it, what applications they’re running and what else you can do to make their life easier.

In any case, either you decide to leverage your existing capabilities or you try to learn what your customers want to do with your cloud, we all agreed around the following statement: it’s still very early days. As Michael again explains, there are still lots of options to get involved, it’s a great time to get involved, and the doors are definitely not closed.

I’d say they’re absolutely wide open. And many have already crossed the doorway. How about you?

You can listen to the full recording of the webinar at this link.

My Research on Cloud Cost Management and Optimization Is Now Available For Free!

How to Make Your Organization Successful in Public Cloud Tagging